So we've done an AC conversion to my best friend's Primavera.  It works great, but there's an empty spot where the battery used to be.  There isn't much space to carry tools on a smallframe Vespa, so I came up with an idea.  If I gut the dead battery and pull out all the plates, it would make a nifty toolbox. 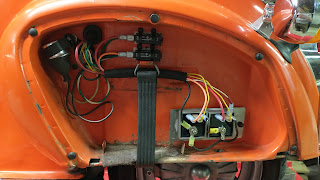 So I rinsed the battery acid out several times while wearing chemical resistant gloves.  Then I took a dremel to the top of the battery case and separated it from the bottom.  I had to saw through the battery posts.

After knocking the inter-cell connectors apart with a chisel, I pulled the plates out and discarded them.  I found an old door hinge in the junk box and fastened that to the back of the battery case so that the lid would close down normally.  The battery-shaped tool box fits right back where it belongs and holds a few essential items in case a roadside repair is needed. After overcoming all the overhaul challenges I had my son help put the engine back into the frame.  We learned a few tricks along the way to help it go better if we have to do it again.  1) Put a short bolt or screwdriver in the opposite side of the pivot bolt to hold things aligned. 2) Put the drop-tail plate back into the lift after the engine is under the frame. 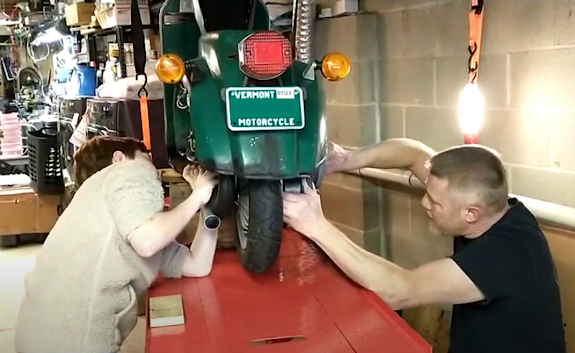 Other than that the most fiddly part was stringing the cables back in.  I highly recommend fluxing the cables and soldering the tips so they don't splay out causing challenges with reassembly.

The original main jet was a 74.  We started with a 90 Main Jet based on advice from friends with the same engine + exhaust combination.  The anticipation is that this will be rich and we'll have to move down.  Our close friend has an 85 main jet in his with the same setup as we are running.  We will see where we fall once we get through the break-in phase.

There is a smallframe build database, that I will consult.  http://sfs.alexander-hepp.de/ 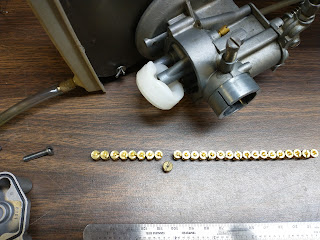 And that's about it.  It took half a dozen kicks to get the gas back into the chamber, and now it starts up on the first kick like it always did before.  I'm genuinely pleased so far.

As the old saying goes there's no replacement for displacement.  Compression counts in there as well.  When taking the cylinder apart, i discovered what was causing the low compression.  The flywheel side gudgeon pin clip had come out, and the pin was gouging the wall of the cylinder.  I found three pieces of the clip, the others must have escaped via the exhaust port.  No more pieces were discovered when the engine was fully disassembled. 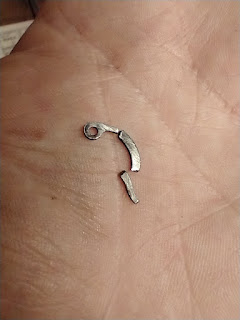 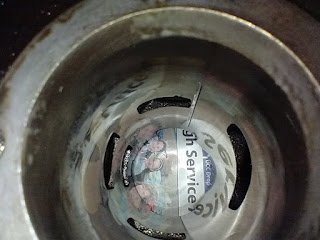 The goal was a simply to install the DR130 kit, but upon discovering the damage, the whole engine had to be taken apart.  The gearbox was dirty, and the retaining nuts for the clutch and pinion gear were not torqued down. 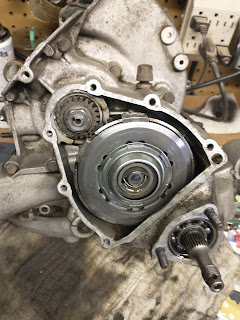 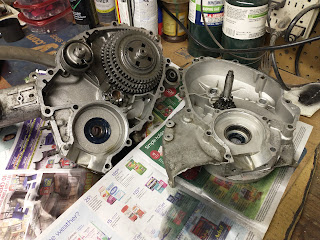 Saved again by Scooter Mercato a gasket and seal set came within the week so that progress could continue.  Unfortunately when starting to put things back together the head studs did not cooperate.  I don't know if they were a bad batch, or what.  I could not get them to torque down, they kept getting more loose.  That could only mean one thing.... they had stripped.  Despite being nicely lubed, they still stripped at less than 10ft-lb.  I complained to AZScooter Parts where I got them from, but it didn't seem to make any difference.  They said it was longer than 30 days since I bought them and shut me out.  (It is rare than a well planned engine rebuild is completed in less than 30 days, especially when I bought all the stuff at the beginning of the summer and rode all summer.) 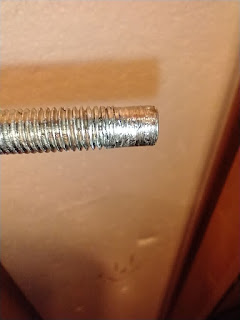 I bought another set of studs from a different vendor, but when the studs arrived they were the same brand as before.  I was not going to be duped again.  I decided to case-harden the threads by heating them to a nice cherry red and quenching them, twice.  They seemed to be adequately hard after that. 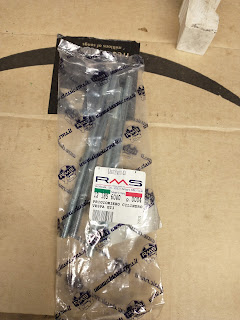 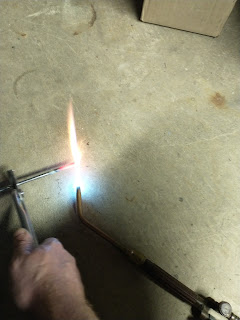 Assembly went smoothly.  I decided to maintain the cylinder head temperature sensor, but didn't want to be bothered by the sensor under the spark plug.  The solution was to put it under the nearest head bolt.  There was very little space available to get the sensor and the torque wrench in there.  The solution was obvious... the smallest piece of casting fin between the head nut and spark plug was begging to be broken off.  So I just got in there with a set of pliers and snapped the sucker off.  Now there was plenty of room for the CHT sensor. 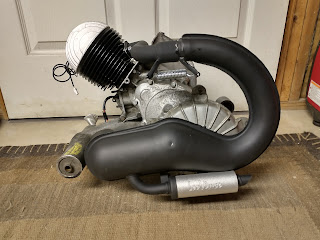 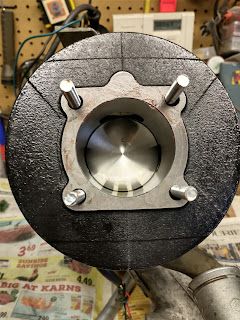 I had chamfered the cylinder openings carefully by hand.  The ring gap clearance was in spec, the squish was acceptable, and this time everything torqued down properly.  I will welcome the extra displacement and some good compression.  A few little details were added.  Any place that the head shroud was fastened to the engine, I added a collar to the 6mm bolt.  This way there was a place that the bolt would torque down metal-to-metal, and not just on plastic.  I had done this on my Stella engine, and it worked well.

The other detail was the shift mechanism cover, that I have never seen on a smallframe in the wild.  I got one cheap on eBay from India, but the mounting hole was in the wrong place.  I don't know if it was intended for a different engine model, or what, but drilling a new hole was easy enough.  The side where the neutral switch was located had to be notched out as well.  The original hole and standoff stud were easily removed and plugged.  Hopefully this keeps dirt out of the shift mechanism. 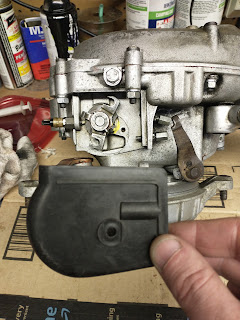 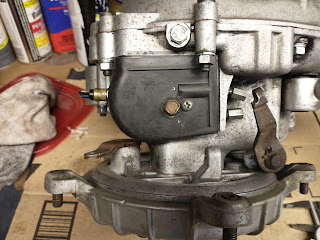 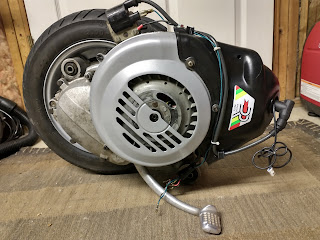 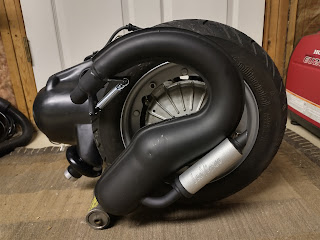 When converting to an alternating current system and eliminating the battery, the original thermal flasher doesn't seem to function very well.  They sell a "AC Flasher" unit, so I bought one.  The duty cycle isn't ideal though.  The turn signals stay ON longer than they go OFF.  I would like to have a little closer to 60% duty cycle rather than about 90%. 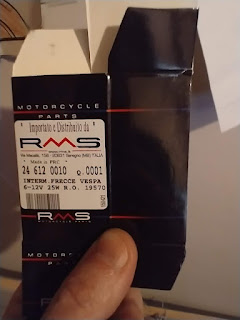 The first thing to do was reverse engineer the circuit to see how it worked.  It seems to be a NPN BJT triggered by R C time constants.  The easiest thing to do is adjust the resistor values to achieve a better duty cycle.

The base charging resistor is the easiest to change, and will affect the off cycle time.  Raising the value of this resistor from 8.2k to 30k should give a more even duty cycle.

I like to use the falstad.com/circuit simulator to test before committing to a change. 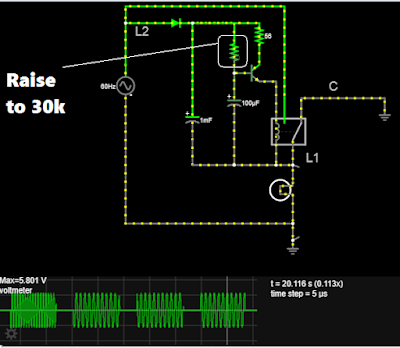 Here's the import source code for the simulator:

The rims on the Vespa smallframe were in pretty sad condition.  They were rusted inside and out from years of neglect and being left outdoors.  They were so rusted along the bead area, I had trouble removing the tire from the rim.  If I ever had to swap a tube alongside the road, this had to be repaired.

The rims were easily stripped of rust by media blasting with an aggressive carbide grit, and then simply dressed up to remove the old paint in non-rusted areas with glass beads.  Powder coating is a very good paint which resists fuel and oils, it is perfect for small removable parts of the scooter. 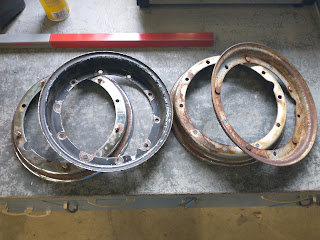 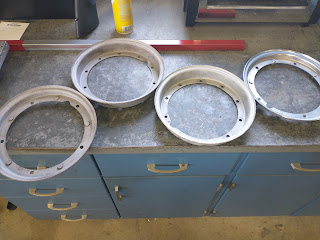 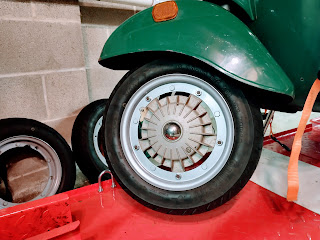 Carbide is not good to use on thin sheet metal like the fan shroud.  Glass beads alone were used here to remove the old paint, and layer of rust. 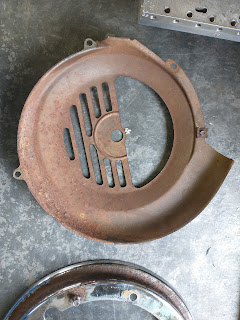 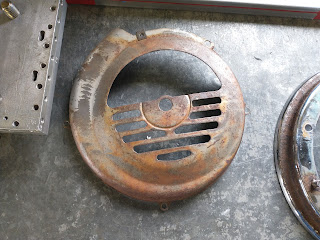 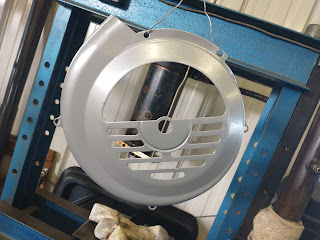 The reason I'm writing this one up, is because I had heard about this modification, but it took me a while to find out how to do it.  So borrowing from the tribal knowledge of many who came before me, here it is.

There is a space above the jets on the Spaco / Dell'Orto carb which is covered by the air cleaner.  This casting has a recess in it that is positioned directly over the top of the jets.  By allowing direct flow to the jets with the provided holes, the difference is amazing.  I don't have a dynamometer, but my "standard test hill" is the proof.  I increased one main jet size and was able to take on the test hill with cooler temperatures and 5mph faster than before.  This is the easiest and most beneficial modification to the 2T engine.

With credit to VespaLabs, here's the difference in the original and drilled air cleaner.

Everything was running so well, until the spark became intermittent.  So the points and condenser were the first target of scrutiny.  I never confirmed the ignition timing, the bike started and ran well enough, so I didn't question it.  It turns out it was just set to the nominal marks on the stator, which is not horrible, but just not ideal.

After a readjustment to the specified 17 degrees BTDC confirmed by a timing light, I set off again.  It wasn't much better.  At that point I ordered a set of points and a condenser.  Immediately upon removing the condenser from the packaging, I tested its value as 225nF (which strangely was the same as the one I took out). 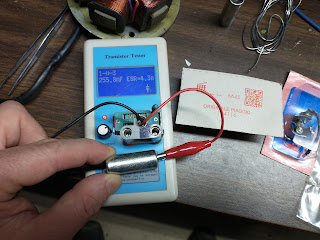 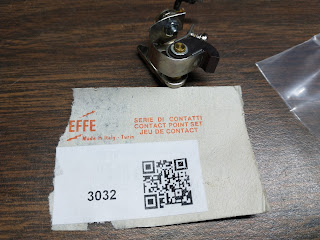 I will keep the original as an emergency spare.  It looks like it was recently replaced anyway.  The erratic nature of the mis-fire led me to believe it was point and condenser related, but I had to rule that out. 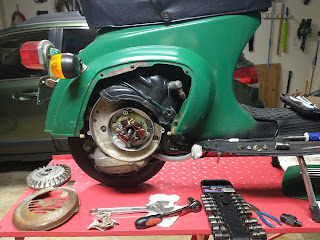 After setting the timing up with the strobe light, it does fire nicely at 17 degrees right at idle.  However its still somewhat erratic at higher revs.  I finally removed the ground connection on the stator and re-soldered the joint.  At the same time I ditched the stock condenser and used a 630v rated vacuum tube radio capacitor.  At 330nF it should be close enough.  I also like how well it mounts. 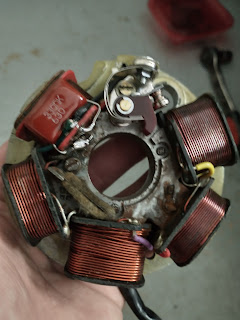 Now that I have the ability to strip the flywheel and re-mount it with my eyes shut, the work went swiftly.  The engine started on the first kick and revs as it should.